Best GPS trackers are amazing devices. If you need to know where a person, vehicle, or asset is in real time, there are a number of great trackers that’ll do the job. However, it’s important to recognize that when Hollywood does GPS, the truth gets stretched a bit. Do you know what’s true and what’s not? Let’s debunk some of the tall tales that have sprung up around GPS.

This is the stuff of science fiction. At least for now. Not for the reason you might think though. In recent years GPS chips have become tiny, nearly the size of your pinky fingernail.

So, if GPS receiver chips are so small, why are tracking devices so much larger? First, a GPS tracker requires two antennae, one for GPS and another for cellular. The size of the GPS antenna will affect how well the chip receives data from the Global Positioning System, and therefore the device’s accuracy. Generally, the larger the antenna, the better the signal.

Second is the issue of power. Anyone with a smartphone knows that it’s difficult to get more than an hour or two of consistent use from a device sending and receiving data. A GPS tracking device must consistently receive GPS data from the satellite network and report its position through a cellular network to be of any use. Get a bigger battery, get more power, get a device that lasts.

When I watch real time trackers on TV, I can see the tracker move across a map, but when I use one, it jumps from point to point 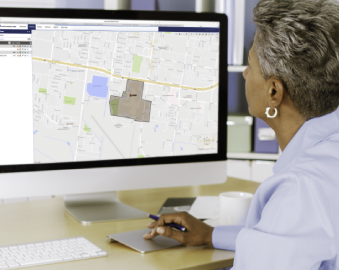 TV and movie producers take some liberties when portraying GPS trackers. It wouldn’t be very interesting to pan a camera over a computer screen to show a dot move every 10 seconds (or even every 30 or 60 seconds). Nobody’s got time for that.

Real time GPS trackers report their positions at a predetermined interval and are programmed based on the needs of the user. This will be determined through a variety of factors, such as the tracker’s size, what’s being tracked, and expected cellular and GPS coverage in the area, among others. Commonly, the fastest reporting interval for most trackers is every 10 seconds.

By not sending a continual stream of data, the tracker can conserve power and potentially operate for weeks, or even months, in some cases, on a single charge. Meanwhile, a tracker set for constant data would likely last only a few hours at best. It also helps keep costs down. For most applications, reporting every few minutes is more than adequate.

So, a tracker sends its location at a predetermined interval, which the GPS platform displays as a point on a map. This usually takes a few seconds to process (depending on network traffic). It sends data this way to provide tracking for as long as possible at the best price.

Hollywood can’t just show a screen that’s static for 30 seconds at a time!

Why does a tracker have a monthly fee? My GPS navigator doesn’t require a subscription

A GPS tracker and a GPS navigator work a bit differently. A navigator will usually come loaded with a set of maps that are current as of its time of programming. These are stored to the device’s memory. The device then receives signals from the GPS satellite constellation which provides it with its own coordinates. The navigator translates those coordinates into a position on a map that’s displayed on your navigator’s screen. Most companies will provide navigator updates every few months, offering you updated maps for a small fee.

A GPS tracker, on the other hand, receives its data from the Global Positioning System and transmits its location via cellular service to a tracking platform which will translate its coordinates into a point on a map. Most will use a standardized mapping service, like Google Maps, so that they’re kept up-to-date without requiring a user to take action.

While a small amount of a monthly monitoring fee goes to the upkeep and maintenance of the platform that keeps the tracker running, the lion’s share is the cost of monthly cellular data. Each “locate” being sent over the cellular network represents a small charge, but they add up over the course of the month.

How do GPS implants work?

They don’t. And we don’t expect to see them in the real world anytime soon. Trackers may be tiny, but batteries aren’t. While it’s conceivable that someone could implant a mini GPS tracker into a human body, it would not be a quick or painless procedure, and because of battery restrictions, would not work for very long.

The tracking chips that are often implanted in dogs and cats are not GPS devices. They don’t send or receive signals the way a tracking device using the Global Positioning System does. They use Radio Frequency Identification (RFID) to code information that can be read by a veterinarian or animal shelter with the correct equipment. RFID chips are usually passive devices that can only be read from within a few feet. They aren’t powered but hold a very small electromagnetic charge that can be encoded with a serial number. A user can then consult a database to find information associated with the animal in question, like its medical history and owner’s address. Pet microchips are essentially digital barcodes.

My device is right outside, but the system says it’s across the street.How accurate is GPS?

This is a loaded question, for which there are several answers. The Global Positioning System can be accurate up to within inches under ideal conditions, with multiple antennae, and if you’re working for the US government or have special authorization. Vanilla civilian systems will generally be accurate to with a few yards, with a “worst case” accuracy of about 25 feet 95% of the time. This accuracy can be affected by outside forces like signal impediments (buildings/trees) and weather events.

Many GPS devices tap into other systems to increase their accuracy. Many governments and scientific institutions have implemented augmentation systems dedicated to providing the most accurate positioning possible by sending out their own signals from fixed locations. Most civilian A-GPS (Assisted Global Positioning System) devices will use cellular (and increasingly often, WiFi) transmitters to improve accuracy.

Why does the accuracy of my tracker change? Sometimes it’s exact, but every once in a while it’s way off

Each of the 27 GPS satellites orbiting the earth is constantly in motion. The system is set up so that at any given time at least four satellites are within the view of any point on the planet. Usually there will be more. The simple answer is that the more satellites your tracker can “see,” the more accurate its position will be. As the number of satellites in view changes, so will your tracker’s accuracy.

It’s also important to note that accuracy may vary when a device is in motion as movement, tall buildings, mountains, and even trees can obstruct satellite coverage. You may also notice that coverage drops in areas that seem wide open. This can be due to interference caused by electronic transmission, such as what is emitted by high power lines.