Teen Driving by the Numbers

The statistics alone are enough to cause parents of teenage drivers to have nightmares. Automobile accidents are the leading cause of death for teens in the U.S. Per miles driven, teen drivers ages 16 to 19 are three times more likely than drivers 20 and older to be involved in a fatal crash.

The Tools You Need to Promote Safe Driving 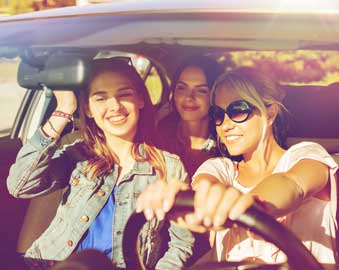 Parents have a responsibility to teach their teen drivers how to drive safely. In a survey conducted by Allstate Insurance Co., 89 percent of teens said their parents are the biggest influence on how they drive. But parents also know that teenagers don't always use the best judgment or follow the rules.

Parents have a right to know what their teens are doing behind the wheel, where they are going, and how fast. Vehicle Tracking GPS technology now gives parents a tool for tracking a teen driver and monitoring his or her use of the family car. GPS vehicle trackers send real-time data of the location and speed of a vehicle to a PC, tablet, or smartphone. The devices can also be programmed to send an alert if the driver exceeds a set speed limit, or travels outside established boundaries.

Roughly the size of a cell phone, Open Box GPS trackers can be either displayed out in the open, or used to track a vehicle covertly. The choice is yours as to whether you want to inform your teen that they're being tracked (more on that later), or if you just want a window into their habits without them knowing. Whatever route you choose, GPS tracking can help turn your teen into a great driver.

As it happens, you may find that your teen is actually doing the right thing behind the wheel, and any fears you have can be easily assuaged with a simple GPS tracker. A mother in Maine found this fact out first-hand.

The Andreson family in Portland, Maine tested a GPS tracking device provided by BrickHouse tracking Security, by installing it in the car used by their 17 year old son, Hunter. The results were documented in a televised report by WGME News 13.

Hunter's mother Allison worries about him when he's behind the wheel. "I just would like to get a true picture of how he is on his own. I expect to find that he speeds," Allison said about tracking Hunter's driving habits without his knowledge.

Hunter feels good about his driving abilities, but admits he doesn't always follow the rules of the road. "I have sped before, but never gotten a ticket for it," he adds.

After tracking Hunter's driving for two weeks, Allison tells him what she discovered. "When you say you are going somewhere, it's been where you've been going." But, she said, he went "a little bit fast on a couple of roads." In summary, she added, "Overall I'm very impressed. It does kind of build up my confidence that he is a good teen driver now."

Start A Dialogue About Safe Habits – Inside and Outside the Car

Telling your teen that you're using a tracking device can be an opportunity to discuss safe driving habits. It can also be a requirement for allowing them to drive their parents' car, or even to buy a car of their own.

"Some parents place a tracking device on their teen's car without telling them," said Dr. Lisa Cohen, a clinical psychologist at Columbia University Medical Center. "Parents are within their rights to do it that way, but I recommend talking to your teenager honestly about your plans first. It shows that you're exercising your rights as a parent, and it makes safe driving a collaboration between you and your child, rather than laying the groundwork for an adversarial relationship."

By installing a GPS tracker the moment your teen begins driving, you're establishing safe habits that are going to stick with them for the rest of their lives. Not only are you going to ingrain good driving practices, but also general good behavior. In knowing where your teen goes when they're "staying late at school" or "staying over at a friend's house," you can course-correct potentially fatal behavior like drunk driving before it becomes a serious issue.

Of course, there is some moral tiptoeing that needs to take place in order for you to be OK with tracking your teen. By being open and honest with them about why you're doing it, however, not only are you starting a useful dialogue with your teen, you're also building trust while promoting safe driving.