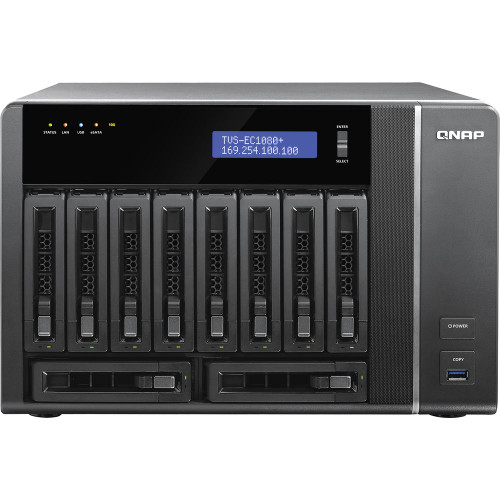 The TVS-EC1080+-E3-32G-US 10-Bay Edge Cloud Turbo vNAS Enclosure from QNAP features 10-bays to hold your drives so you can manage, share, and back up business data. This NAS storage solution supports VMware, Citrix, Microsoft Hyper-V, and advanced virtualization features. In addition, it supports two onboard mSATA internal cache ports, and up to 4 SSDs can be used for caching. With a well-rounded set of backup solutions integrated into the Turbo vNAS, critical business information can be safely protected against unexpected data loss with real-time or scheduled data backups to a remote server. It encrypts your data with military level FIPS 140-2 AES 256-bit encryption, preventing access to sensitive data from unauthorized users even if the entire system or drives are stolen.

The QNAP Turbo vNAS sports a quad-core Intel Xeon E3-1245 v3 processor and 32GB of RAM to enhance the efficiency of NAS-consuming tasks such as running multiple virtual machines, real-time 4K transcoding and serving large numbers of simultaneous connections. It can stream your multimedia library and is able to perform on-the-fly and offline video transcoding, which converts the video's resolution based upon the device's native resolution. While network connectivity is achieved using its four Gigabit Ethernet ports, this NAS can be expanded with an optional Gigabit Ethernet card or a 10GbE network adapter, which delivers faster data transmissions. Furthermore, QNAP has equipped the TVS-EC1080 with an HDMI output along with USB ports that let you use your monitor, keyboard, and mouse to access it directly.

The TVS-663-8G-US 6-Bay NAS Enclosure is a powerful, reliable, secure, and scalable NAS so…

$1,129.00
See Details
x
Thank you or requesting a stock alert! Please enter your email address below and we will notify you when your item is in stock.